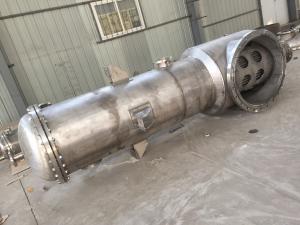 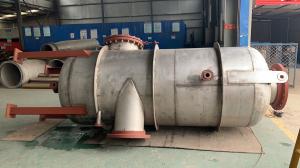 Desalination has become the main way to obtain fresh water in water-scarce regions such as the Middle East. Among the seawater desalination production methods, the most reliable and most used method is the multi-stage flash evaporation method. The equipment of this method is mainly composed of seawater heating, heat recovery condenser, heat output condenser, ventilation condenser and jet compressor, etc. Part of the structure, the heat exchange part uses a large number of heat transfer tubes, the original copper alloy tube, because the copper alloy is not corrosion resistant, it has been replaced by the titanium tube. Among them, the commonly used materials for plates in the plate heat exchanger and heat exchanger industries are mainly cold-rolled sheets such as austenitic stainless steel, titanium and titanium alloys, nickel and nickel alloys. Industrial pure titanium GR1 is used for plate heat exchange gas, and industrial pure titanium GR2 and titanium alloy GR12 (Ti0.3Mo0.8Ni) are used in tubular heat exchangers. Compared with tubular heat exchangers, plate heat exchangers made of GRl titanium plates have many advantages and are highly competitive in the market. They are mainly used in heat exchange systems such as chemical, petroleum, naval vessels, and seawater desalination. The types and uses of titanium used in seawater desalination are shown in Table 1. With the development of the power and desalination markets in the Middle East and Asia, the demand for thin-walled titanium welded pipes will gradually increase, thereby driving the market demand for titanium and forming a new economic growth point.

1. Titanium is the material of choice for heat exchangers of seawater desalination equipment.

The evaporator in the seawater desalination unit is exposed to high-temperature seawater, and the salinity increases after evaporation. Titanium alloy is resistant to high temperature ion corrosion and can be widely used in the evaporator of seawater desalination equipment. At the same time, titanium has strong corrosion resistance to chlorine and is the material of choice for heat exchangers of seawater desalination equipment. With the rapid development of petrochemical, electric power and other industries in coastal areas, replacing increasingly tense fresh water with seawater as an industrial cooling medium can save a lot of fresh water resources and obtain significant economic and social benefits. However, due to the strong corrosiveness of seawater, when the tube bundle is made of ordinary carbon steel or stainless steel, seawater as the cooling medium will cause severe re-corrosion of the tube bundle, which will reduce the service life of the heat exchanger, not only increase the number of equipment replacements, but also cause equipment failure. Cause the device to stop working too frequently, thereby reducing economic benefits. Under normal circumstances, in order to solve this problem, it is necessary to upgrade the material of the tube, and the upgrade material is usually titanium tube.

In terms of titanium material selection, industrial pure titanium ASTM Gr2 is the most widely used. Facts show that industrial pure titanium such as Gr1 and Gr2 has special resistance to stress corrosion cracking in natural water, seawater and various chlorides; and temperature comparison High seawater heaters use Gr7 or Gr12 with higher corrosion resistance; Gr16 (Ti 0.5% Pd) has higher corrosion resistance, but the cost is more expensive. In addition, in the titanium seawater desalination equipment with a seawater flow rate of 3 to 5 m/s, the biological fouling phenomenon is the least, and the fouling coefficient of the titanium heat exchanger is about 0.95 to 0.99. The industrial pure titanium GR1 seamless tube is used as the condenser tube of the flash evaporator and the heat exchange tube of the brine heater, and the tube plate is selected GR1+16MnR+316L double-sided composite steel plate. Titanium is light, corrosion-resistant, and has high strength. It is a good seawater corrosion-resistant material, and its reliability is high. The use of titanium composite steel plate can reduce the amount of titanium used, and can meet the requirements of use and reduce the cost of the device.

The main technical parameters of the BR035 plate heat exchanger are: the single-piece heat transfer area is 0.35m2; the plate spacing is 3.2mm; the plate thickness is 0.8mm; the corner hole diameter is 120mm; the cross-sectional area of the single flow channel is 0.001136m2 . , The maximum processing capacity is 120m3/h; the heat transfer coefficient is 2500～5000W/(m2 ℃), the working pressure is 1.6MPa; the working temperature is: when using nitrile gaskets below 120℃, use ethylene-propylene rubber When the gasket is lower than 180℃, when the fluorine rubber gasket is used, it is lower than 250~C; the maximum installed area of a single device is 70m2, and the large single-piece heat exchange area is 1.28m2, 1.3m2 and other liquid-liquid heat exchangers. This large-scale plate heat exchanger has an external dimension of 2.2m*0.81m, a plate thickness of 0.6mm, and a maximum combined area of 350m2. This indicates that my country has a strong level of design and manufacturing capabilities for titanium plate heat exchanger equipment. Titanium for heat exchangers is very mature. Generally used titanium tubes have an outer diameter of 10～80mm and a wall thickness of 0.3～0.5mm. 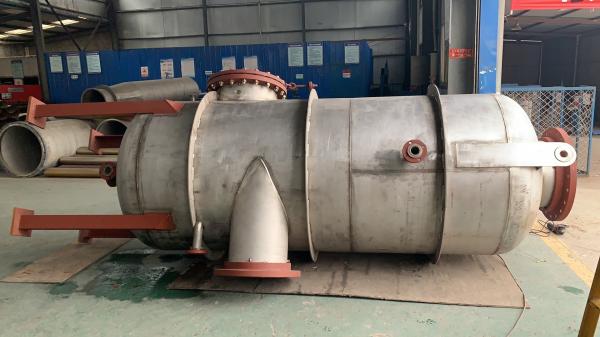